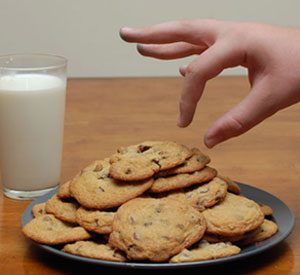 No parent ever wants to find out anything is “wrong with” their child. But when milk sensitivity symptoms in toddlers start to appear over a span of weeks or months, what else is a watchful parent to think? Our little girl started having some really interesting (Read: disgusting, unusual) messy diapers right around the same time she tried cheese for the first time. It seems possible she’s dealing with a cow’s milk allergy.

We’ve begun an elimination diet to remove all dairy and soy from both of our diets (since I am still breastfeeding at the time of this post).


What’s Wrong with These Diapers?!

Stop reading here and skip ahead if you are easily queasy. In the interest of helping other parents detect possible milk sensitivity symptoms in toddlers, I’ll give details. Okay, don’t say I didn’t warn you… Her diapers were downright rotten with chunks of undigested food that you could still tell what she’d eaten – blueberries, rice, seeds from squash. The dark color didn’t match the medium brown I remembered from my first child. The stench alone could clear a room. Diapers emitted what I can only describe as something of a rottenly sweet, possibly fermented odor.

My four-year-old would dash out of the room covering her nose any time there was a stinky diaper. (Has your child ever left a sippy cup of milk out for a day or two? I kind of feel like that odor may have been similar, which is part of why I suspect cow’s milk protein allergy.)

The doctor told me sometimes kids don’t digest those fiber bits of foods, but I never saw that in a diaper with my older child. I suppose to each his or her own?? The funny thing is that while the diapers at their worst seemed goopy, I can’t say if it was true diarrhea or not. She still made number twos only every two to three days apart or so. Certainly not multiple times a day!

Also, she never really had a blowout. (BTW – Isn’t it funny how you can be so cavalier talking about poop now that you are a parent?) So while the stools are seemingly not normal, they could be normal for her – or so I am told. But I’m not so sure I buy it. I guess time will tell. OK, it’s safe to read again.

Parents should understand that the milk sensitivity symptoms in toddlers may vary. Your child’s symptoms will depend on what part of the milk your child has trouble digesting as well as how your toddler’s body responds. Doctors may tell you that lactose intolerance symptoms in babies almost never equate to your child actually being lactose intolerant. Our pediatrician told me it is extremely rare in children under age five to have lactose intolerance. (With both of our daughter’s grandmothers having milk sensitivities of some sort, I asked about it.)

Cow’s milk protein allergy, on the other hand, is a more common issue for as many as 1.9 to 4.9 percent of babies across the globe, according to CMPA Support. Meanwhile, the National Institutes of Health suggests it could be more like 15 percent of infants. With CMPA, ingesting cow’s milk sparks a reaction to dairy with symptoms manifesting either instantaneously or on delay, even several days later.

Allergy to milk protein symptoms may range from signs as severe as vomiting and stomach pain to those as common as gas and colic. Milk protein allergy in infants and toddlers can cause eczema, diaper rash, and other skin conditions. With a milk allergy hives are also common. Your child may also experience respiratory symptoms and problems with digestion. You can check out a full list of symptoms at CMPA Support.

Symptoms of lactose intolerance in young kids may include watery diarrhea, gas, upset tummy, rashes, and stomach pain, to name a few. You can find more specifics at the American College of Gastroenterology website.

Despite the yucky diapers and slow growth, Liv’s vitals were consistently good. She still had a good appetite and she wasn’t vomiting. Just those messy, stinky, goopy diapers… She did have eczema on the backs of her knees, but so did my older daughter. For that reason, I’m not sure if it counts as one of the milk sensitivity symptoms in toddlers. Her one-year well visit marked her at just the one percentile for other little girls her age.

She’s gained a bit of weight since then and the pediatrician isn’t concerned. She’s probably the happiest baby I’ve ever seen (knock on wood), even if she is a little small.

The doctor suggested we go to see an allergist just in case. We saw the allergist on February 1 thinking it would be good to get some allergy tests done. Interestingly, the allergist didn’t even want to do an allergy test on our daughter since she didn’t display classic symptoms of food allergies like hives or difficulty breathing following ingestion of any food groups.

Knowing all about milk sensitivity symptoms in toddlers, the allergist did decide to restrict our diets at that point, and told me to avoid feeding Olivia any dairy of any kind and not to supplement with soy either. In fact, she wanted us both (since I’m still breastfeeding) to avoid all dairy and all soy, which, if you’ve never had to do it, is really quite difficult.

Once you start reading labels, you’ll see lots of hidden milk and soy in just about everything in a package. At least that’s how it feels. We were disappointed to walk out of the allergy office with essentially no testing (we did do a peanut allergy test since hubs is allergic) and a $255 bill, but I guess that’s how it goes.

If your little one’s symptoms indicate a milk allergy, I heard the best cow’s milk allergy test to detect a cow’s milk protein allergy is the Hemoccult, which checks for hidden blood in the child’s stool. Basically you smear a bit of their number two on the Hemoccult card and the doctor’s office applies a solution that will show if there’s blood in the sample.

Milk protein allergy in toddlers is common and I believe our kids may have an elevated risk of food allergies and intolerances in general since we as the parents have some allergies of our own. (Certainly for peanuts and if hay fever counts!) Our parents also exhibit some food intolerances.

Of the cow’s milk protein allergy symptoms, my daughter presents with unusual stools, constipation/diarrhea (take your pick), an eczema rash, a positive Hemoccult test, and slow weight gain and growth. It sounds like a good possibility, but current protocol when examining milk sensitivity symptoms in toddlers seems to be a process of elimination rather than a swift diagnosis.

It’s also worth noting that since we discontinued milk and soy, Liv’s diapers have improved slightly, but not consistently. I’m not sure what to think, since we’ve cut out dairy and soy for almost a month. I’d like to think it should be out of her system by now. We sometimes see more normal toddler poop than we are used to, with the terrible smell gone, but then a few days later, back to the noxious nappies.

I’d be inclined to think if it was an allergy to milk protein, the elimination effects would be more consistent. So, I’m stumped. Is it or isn’t it?

Focus on What You Can Do

While a dairy products allergy is possible, we have no firm answer as of yet. Our child is otherwise very happy and healthy. Even though you tend to worry as parents, it’s usually best to keep moving forward proactively any way you know how. In light of our daughter’s current dairy free diet, I have done some research. I’ve learned that many babies and toddlers go through a phase of milk intolerance or sensitivity to cow’s milk protein.

Sometimes it even goes undiagnosed. Parents may suspect milk sensitivity symptoms in toddlers but may not ever really get a diagnosis. The vast majority of kids do outgrow it, but it can last until age two or even age six in some kids.

I struggled with the no soy, no dairy diet for both of us initially. If you look, you’ll find a lot of hidden milk in some favorite things—raisin bread, Goldfish crackers, just about any baked goods (butter). And what doesn’t have dairy in it very well may have soy, and vice versa. I now make almost everything from scratch lately—all our dinners and lunches, bagels, scones, even soft pretzels. Bye-bye, easy takeout and delivery of pizzas and cheese steaks.

Even though we still don’t have a diagnosis, just a roundabout suspicion from a doctor and some info on milk sensitivity in toddlers that we’ve read.

So long, eating in restaurants… Although we (I) CAN eat the lettuce-wrapped variety of grass-fed beef burgers at Elevation Burger! All beef, no soy, no dairy – just don’t forget and say “yes” when they ask if you want cheese. (Lament: Oh, how I miss cheese!)

I hope these tips about milk sensitivity in toddlers are helpful. If you think your child might be sensitive to milk, be sure to check with your doctor or allergist for best plan moving forward.

With this in mind, I’ve decided to share my efforts so far in case they can be helpful to someone else. Milk sensitivity symptoms in toddlers can be so similar to other GI issues!

If you have a toddler or baby allergic to milk protein, good luck. I’m hoping I can deliver some useful information, substitutions, and recipes for your use while we’re on this journey. I’ve often wished for a dairy free meal plan, so my plan is to create one.  So, I am putting together a series of articles featuring dairy free toddler meals and snacks that I hope will be helpful.

Stay tuned for the first article on dairy free breakfast for kids coming soon. You can check back to our Toddler Health section for updates when they’re posted.

allergies birthday parties chicken crafts entrees feeding tips fish fruit Halloween holidays leftovers Minnie Mouse must-haves pancakes restaurants shaped food thanksgiving toddler meals Treats turkey veggies video
We use cookies to ensure that we give you the best experience on our website. If you continue to use this site we will assume that you are happy with it.Ok